Earlier this month, the Milken Institute released a detailed qualitative and quantitative assessment of the current insurtech landscape. Profiling more than 100 insurtech companies, the Institute analyzed both funding and innovation trends, noting that while “there are a variety of actors involved in the insurtech space, incumbents are increasingly becoming the driving force behind its growth and development,” a theme The Council has also seen in 2018.

Defining insurtech as “an insurance company, intermediary or insurance value chain segment specialist that utilizes technology to provide valued-added benefits to the insurance industry,” Milken found that on the distribution side, insurtechs likely fall into one of three categories: 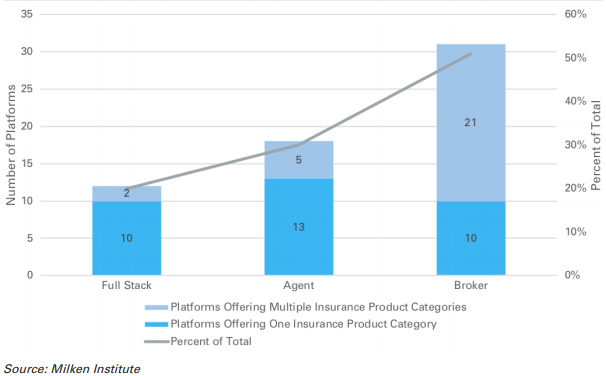 Full Stack: Platforms that underwrite policies, assume the risk (or an insurer or reinsurer that assumes or shares risk) and, in most cases, manage the process from beginning to end.

Agent: Platforms that act on behalf of a carrier, essentially acting as an extension of an incumbent carrier.

Broker: Platforms that provide customers with a variety of policies offered by both incumbent carriers and insurgent insurtech platforms.

The disparity between the number of full-stack insurtechs and Milken’s agent and broker insurtechs is not surprising due to the high barriers to entry for becoming an insurer: the amount of capital required to take on risk, the high costs of building a book of business, inconsistent laws and regulations across the 50 states and so on. As previously discussed in this newsletter, even well-known full-stack insurer startups like Lemonade, Metromile and Root have still experienced unsustainable loss ratios.

Insurtechs falling outside the intermediary space (43 of the 104 analyzed) were identified as “technology solution providers,” seeking to enable the value chain through streamlining operational business processes and leveraging data to enhance product delivery. Within this universe, Milken found three primary subgroups: human resources and benefits solutions, data analytics providers and infrastructure solution providers such as platforms that focus on making back-end processes more efficient through the use of APIs. Notably, the report found that less than 10 percent of insurtech investments to date have flowed into targeting full-scale value chain disruption while more than 90 percent “have partnered with, or are seeking to engage with, one or several (re)insurance carriers to provide greater efficiencies at different points along the insurance value chain.”

On the regulatory front, the report found that several countries are striving to better understand the insurtech landscape to determine if (or how) current regulatory structures need to adapt in order to accommodate technology-fueled innovation in the insurance ecosystem. The UK, as mentioned above, has already implemented a regulatory sandbox under the aegis of the Financial Conduct Authority—it was the first country in the world to do so – and though only 15 percent of the firms selected for the sandbox’s first cohort were insurtechs, “nearly one-third of the 24 companies selected for Cohort 2 were insurtech platforms.” Similar interest in insurtech has been displayed in Hong Kong, Bermuda and Thailand, all of which have opened sandboxes geared toward welcoming insurtech firms.

This report only reinforces what The Council learned during its time at InsureTech Connect: disruption is no longer the order of the day. Insurtechs have pivoted towards narrowing their focus to attack pain points in the industry instead of aiming to replace established incumbents, and that will likely make them a catalyst for productive change in the industry.